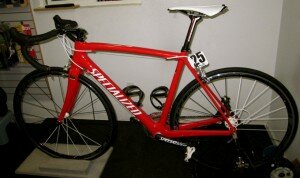 Ever wondered what it would be like to inherit the vehicles of iconic names associated with speed? What would it be like to drive Mario Andretti’s Formula One racecar, or Chuck Yeager’s Bell X-1, the experimental aircraft he used to be the first to break the sound barrier? I can’t say that I’ve given either of those scenarios much thought but, what I can state emphatically, is that I have often pondered what it would be like to ride a Pro Tour rider’s race bike.

Just last week, due to the kindness of NorCal Bike Sport, I became the proud rider/owner of Andy Schleck’s 2011 Specialized S-Works Tarmac SL 3, the actual bike he used in this year’s Tour of California. With the exception of the bars and stem, which were narrow and custom to his needs, the bike is as he rode it. It has Specialized’s S-Works carbon crank set which compliments the racy “Team Geometry” carbon frame, making for a very lightweight, stiff, power-transferring race machine. The icing on the bike’s cake is that it is built around a set of Specialized’s Roval Rapide SL 45 wheels, which are constructed using one of Specialized’s proprietary rims coupled with DT hubs and spokes. As if it could get any better, it still had his race number on it. He was 25, check it if you think I’m lying.

I couldn’t be more stoked, over the moon in fact. The “kid in the candy store” doesn’t even come close to expressing how floored I am by having the opportunity to ride and race this bike. Funny thing is, though, Andy Schleck and I couldn’t be more diametrically opposed when it comes to our riding strengths and weaknesses (mainly my weaknesses). He is not only one of the world’s best climbers, as he proved in this year’s Tour de France, but is a world-class time trialist as well. My 5’11”, 180 lbs. frame (on a good day), is light-years away from Schleck’s gangly, wafer-thin 6’ 1” shadow, which means that climbs are my nemesis. I don’t time trial particularly well either, unless it’s really flat and there’s a tail wind.

I’m hoping that some of Andy’s world class cycling prowess/skill/strength/fitness will somehow be transferred to me via osmosis, or contact high—either method works for me. The bike could also have a psychosomatic effect, often like the Maillot Jaune does on Tour riders, and give me the strength to lose the piano off my back when I’m climbing. Just as long as I don’t drop my chain.

7 Responses to Breaking the Sound Barrier