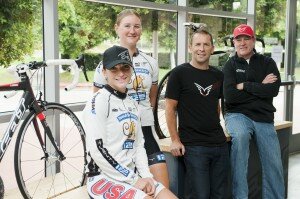 Felt Bicycles recently announced a new partnership with the Peanut Butter & Co. TWENTY12 Professional Cycling Team. For the next two years the U.S.-based elite women’s team will compete on Felt bikes at the world’s most prestigious road and track events with a target on the 2012 Olympic Games in London.

Nicola Cranmer, general manager and founder of the team commented on the partnership, “As our name indicates, our goals are to develop Olympic-caliber talent that can compete internationally at the highest levels. We are delighted to have a bicycle partner that is as focused about this mission as we are.”

The Peanut Butter & Co. TWENTY12 Team is directed by one of the most accomplished U.S. racers in the sport—two-time World Champion and Olympic Gold Medalist Kristin Armstrong, who just last week announced her comeback to the sport of cycling. “Kristin’s contribution as a director was invaluable this season,” said Cranmer. “Having her directing and competing in 2011 will really take this team to the next level.”

The California-based team got its start as a premier women’s elite squad in 2006 and has put up some impressive results. This year, the team amassed 88 podiums and 55 wins including nine National Championships, two Pan American Gold Medals and two World Cup Track Silver Medals.

“The opportunity to work with Peanut Butter & Co. TWENTY12 is one that we are very excited about.” said Jim Felt, the company founder of Felt Bicycles. “This team features some of the greatest women cyclists in the world and its emphasis on developing young athletes is consistent with ours. We are simply thrilled.”