Finessing The Fondo: Finding The Flow At The 4th Annual Levi’s Gran Fondo

It wasn’t destined to be your standard Saturday ride. The fact that the start line was positioned in front of nearly 7500 people basically guaranteed that. But, if there were any room for doubt, it was quickly erased when just about 60 miles into the day’s route, Tom Ritchey and his wife Martha flew by me on a hairpin descent at well over 40 miles-per-hour, together—on a tandem. 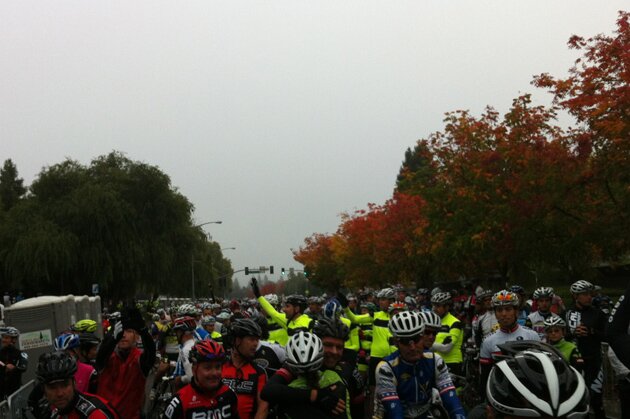 7500 riders makes for quite the line-up. Those in the back would end up crossing the start line well over 15 minutes after the riders at the front of the group.

Tom Danielson leads the third group on the road. Don't worry, he wasn't there for long. A quick little session behind the lead moto at over 40-miles-per-hour had him flying by yours truly in the chase group and up to the leaders in no time.

You see, it’s all in a day’s ride at Levi’s Gran Fondo. The largest fondo in the United States, this year marks just the fourth year for the event, making it one of the fastest-growing cycling events in the world.

Attracting top pros and weekend warriors alike, the reputation of this particular fondo certainly preceeded it. We’d run a story on it in the premiere issue of Paved and I’d heard from countless people that it was a ride one would be hard-pressed to top—anywhere.

I’d also heard it was fast.

While certainly the beauty of a gran fondo is the fact that it’s yours to make of it what you will, sometimes it’s hard to ignore the impudent call of competitiveness in the company of some pretty fast—and pretty competitive—dudes.

Fresh off a nice little training block that took the form of the Specialized Vegas Ride, I was sitting on some pretty good form, and I’d decided that if I was going to drive nearly 1000 miles round trip to ride 100, I was going to make them count. It would be my first fondo, and I was determined to make a good go of it. And, after pulling a few strings to get a prime position on the start line, it left me no excuses after the gun went off.

The author sits second wheel in the chase group, and whose eyes were so crossed at this point that he didn't even notice this picture was taken.

Taking over the whole four-lane road, rolling out from the start was certainly a new experience for yours truly. Brushing elbows (quite literally) with some of the sport’s greats such as Tom Danielson, Kristin Armstrong, and Levi himself, I’d never been in such close quarters with greatness. I mean, I’d once met Weird Al Yankovic, but star struck wouldn’t exactly describe that experience (Sorry Al). Throw in the fact that the previous day I’d witnessed them, along with Grey’s Anatomy star Patrick Dempsey and 4-time Leadville Trail 100 winner Rebecca Rusch face off in a donut-eating contest (coverage and photo-gallery coming soon!) and it was shaping up into a pretty surreal weekend.

As we made our way out of Santa Rosa and into the hills, the pace ticked up noticeably. It was looking like the first proper climb of the day up Occidental Road would be where the first separation of the day would occur. And it did.

Three wheel lengths from the lead group of twenty or so, I could do no better over the crest of the climb and I was forced to sit back and wait for a few more stragglers. Soon joined by a burst of color in the form of a Jelly Belly rider, we set to work getting ourselves to the next climb.

Up the infamous Kings Ridge, I soon found myself overwhelmingly hypoxic yet again as I coaxed my legs to stay on the wheel of reigning Olympic time-trial champion Kristin Armstrong. While I may not have been up the road with Levi et al, I wasn’t too disappointed considering my current company.

Picking up a few of the discards from the dwindling lead group, before long the familiar twinges in my quads, just above the knee, served as the dreaded precursor to an inevitable bout of cramping. Thankfully the climb let up, morphing into a series of rollers that would take us along Kings Ridge, and more importantly, the first “gentleman’s stop.”

Taking stock for the first time during the ride thus far, It occurred to me that I may have come into the event with the wrong ambitions. After downing a few Oreos and a PB&J, I was warming up to the idea that this ride wasn’t simply about going fast. Sure, that was definitely an option—and there were plenty of folks going plenty fast—but I realized I faced missing out on one hell of a ride.

With some of the best roads and scenery to come, I decided I’d rather remember Levi’s Gran Fondo by the sights and sensory overload, rather than power numbers and placing.

Descending off of Kings Ridge brought lots of fog and a refreshing chance to cool off—not to mention some pretty dramatic views.

Plus, I was already pretty worked.

What followed after the first rest stop, besides a slower pace, was definitely harder to describe, but only due the fact that attempts to describe what I was taking in wouldn’t come near to doing it justice. Serpentine descents and breathtaking overlooks took us on a scenic tour of some of Northern California’s most picturesque coastline. So enraptured was I by it, I hardly noticed Tom Ritchey and his wife begin their pass halfway down one of the descents. Passing two cars as easily as they passed me, they were out of sight frighteningly quick.

Tom Ritchey and his wife Martha let me catch up for a little photo-op after mercilessly dropping me on the descent. Martha definitely earns the Most Courageous Stoker award.

As the road flattened out I enjoyed a nice draft from Mr. and Mrs. Ritchey for a few miles, but parted ways when I decided to take the road less traveled—the gravel road option—which only served to reinforce my decision to slow down and take it all in. Forced to a crawl by elusive traction and steep grades, I can’t recall the last time I’d enjoyed myself so thoroughly on a road bike.

Joining back with the paved route, I spent the rest of the ride chatting with other riders, putting in a few efforts in a couple pacelines that were passing by, dropping off to eat a few blackberries on the side of the road—following my whims and finding the flow.

California's Northern coast is worthy of any cyclist's bucket list.

Ultimately, my first fondo experience had a bit of everything. A brief attempt to follow the unfollowable was, in due turn, followed with a sharp drop in ego, which payed some serious dividends in the form of a ride I’ll not soon forget—and for all the right reasons. And, for those who have never ridden on California’s Northern coast, do yourself a favor and put it on your to-do list. Seriously.