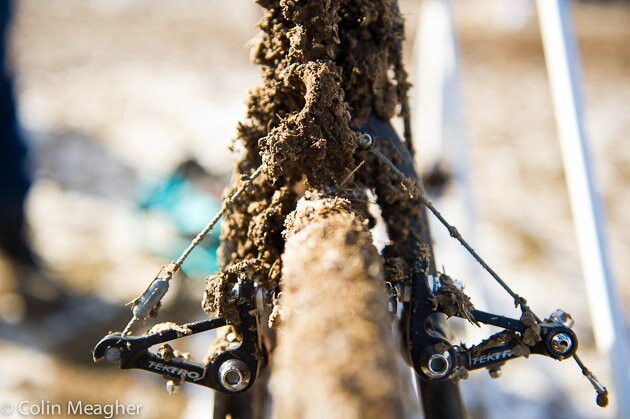 USA Cycling’s 2013 U.S. National Cyclocross Championships may be done and dusted, but they won’t soon be forgotten by the droves of fans who came out to Badger Prairie State Park in Verona, Wisconsin—and they certainly won’t slip from the minds of the competitors who braved the mud, ruts and cold weather.

Photos and captions by Colin Meagher

In the days leading up to the Elite events, and during the races themselves, pressure washers saw more than their fair share of use.

Track conditions immediately before the start of the women’s elite race.

Getting the holeshot: Nicole Duke, surprisingly enough, got the hole shot—usually Katie Compton’s forté. Compton opted to stay simply near the front until the second straightaway.

The race for second place—all of a half lap into the Elite Women’s event.

The run-up on the back side of the track was steep, and the steps were staggered irregularly, making it difficult for racers to find a rhythm.

Compton was simply on another level at this race and put her stamp on another U.S. national title.

Ryan Trebon, grabbing the holeshot on the long opening straight.

Tim Johnson grabbing a fresh ride. The clinging mud that made the women’s race a living hell began to firm up, making the men’s race that much faster. During that brutal women’s event, riders were pitting as often as possible, but with the firmer track, the men were pitting only once every lap-and-a-half or so.

Disappointed, but whatcha gonna do? Zach McDonald thanks the fans who’d helped propel him to second place.