Pulling Back the Curtain: A Look at Giro’s Headquarters 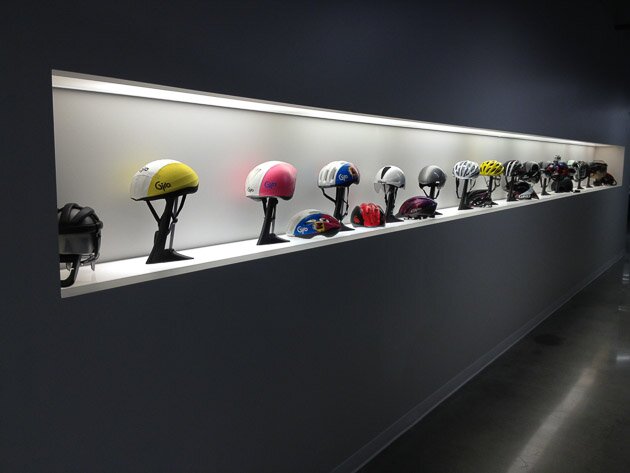 Giro offered a behind the scenes look at their headquarters in Scotts Valley, California, revealing a few secrets and insights into the process of creating new products and their constant quest for innovation.

The theme of the tour centered on the handmade approach Giro’s designers and engineers take when creating products. From the initial sketch of a new helmet to the graphics that adorn the finished product, the development process is far more hands on than one may expect.

“You just can’t design something you wear that’s beautiful using a computer,” said Eric Richter, Giro’s Senior Brand Manager. “Function must drive design, but the trick is to combine appealing aesthetics with the data to back it up.”

Enter the Giro Air Attack. While the look of this aero helmet may be polarizing, initial orders have far surpassed estimated demand, suggesting a huge shift in consumer preference. You can’t deny the technology built into the Air Attack, even if it resembles a throwback skate lid more than a wind-cheating road helmet.

The goal of the Air Attack is to create an entirely new category and set a standard for the design aesthetics of an aerodynamic helmet made for the road, according to Richter. Giro’s tests revealed it to have the lowest wind-averaged aerodynamic drag of any other “road” helmet design on the market. It even came close to their time trial specific Selector helmet in the wind tunnel. If you’re wondering how it feels out on the road, the RocLoc Air system keeps this helmet shockingly well ventilated by scooping air up underneath the helmet to keep your head cool.

A peek behind the locked doors of “The Dome,” which is Easton-Bell Sports’ creative epicenter, revealed a brain trust of industrial designers, engineers, model makers and graphic artists all working toward building the next “big thing.” A state-of-the-art rapid prototyping room with several $40,000 machines allows designers to bring their ideas to life quickly and efficiently. A safety test facility, three CNC machines and 3-D printing capabilities allow Giro to stay at the forefront of the industry.

These tiny foam models are littered throughout Giro’s offices.

A clay block patiently waits like a caterpillar ready to be turned into a butterfly at the hands of one of Giro’s designers.

If the Air Attack were the Sistine Chapel, Greg Marting is Giro’s Michelangelo. His official title is Senior Industrial Designer. He sculpted the tan helmet in his left hand, which is within a 5% margin of accuracy compared to the computer-designed helmet in his right hand.

Marting shows off the AeroHead, a creation of the ‘80s that still holds its own in the wind tunnel against modern designs.

A history in helmets. From the first Prolight in 1985 to the second version of the Air Attack in 2012, this wall of The Dome is a visual representation of Giro’s many innovations.

Now entering the Dome Zone. This area is normally restricted because many of Giro’s new products are born here.

A look at the complexity of one of Giro’s tooling devices.

The employee bike racks were packed, with latecomers having to stash their rides in the hallways.

This entry was posted in Featured and tagged giro, Helmet design. Bookmark the permalink.