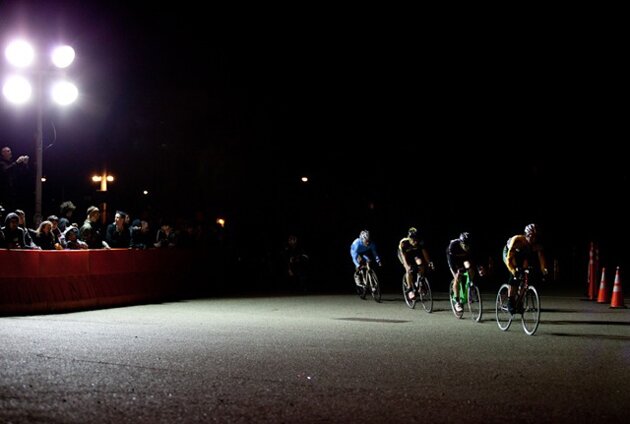 With rain looming, the Fifth Annual Red Hook Criterium went off at 9:15 P.M. as is tradition for the young, but already iconic event. Contested by roadies, track racers and messengers alike, track bikes are mandatory and the course is designed to favor those with both endurance and urban handling skills.

With nearly 100 riders taking the line, both male and female, it was a frenetic mass start—the first several laps a rough-and-tumble struggle for position. A lead group eventually forming, the main protagonists included last year’s winner and Brooklyn local Dan Chabanov, along with West Coast players Aaron Bradford from Rock Lobster and riders from the San Francisco-based MASH team.

Chabanov jumped early, with two-thirds of the race yet to play out, yet was able to build a healthy gap, with a lead group of nearly twenty riders chasing hard.

Using the corners to his advantage, Chabanov was able to hold the closing pack, still finishing 10 seconds ahead fo the chase group—plenty of time to coyly blow kisses to ironically bespectacled and mustachioed onlookers on the back stretch of the course.